AAHRMEI Board Members Inducted – FastTrack IT Academy in full support

by Fasttrack IT Academy | Blog 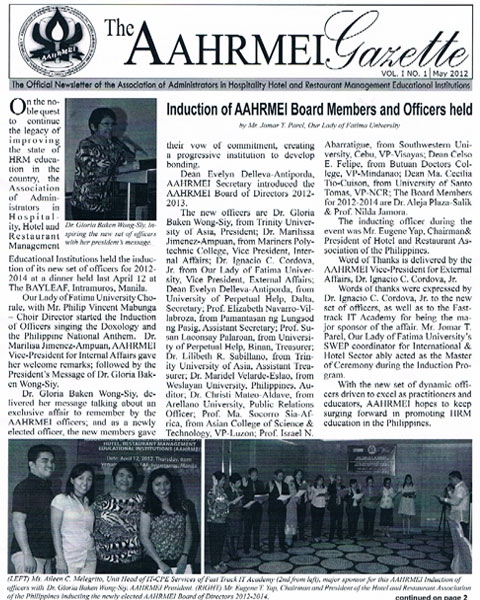 The Association of Administrators in Hospitality, Hotel and Restaurant Management Educational Institutions (AAHRMEI) held the induction of its new officers for 2012 – 2014 at a dinner held last April 12, 2012 at the Bayleaf, Intramuros, Manila to continue the legacy of refining the state of HRM education in the country. Dr. Gloria Baken Wong-Siy, of Trinity University of Asia, along with the new members gave their vow of commitment to create a progressive institution to develop bonding and keep surging forward in promoting the HRM education in the Philippines.

Words of thanks were expressed by Dr. Ignacio Codova Jr, AAHRMEI Vice-President for External Affairs, to the new set of officers, as well as to the FastTrack IT Academy for being the major sponsor of the affair.

FastTrack IT Academy, being the major sponsor, supports and values the advocacy of AAHRMEI in advancement of quality and excellence of the hospitality education. FastTrack IT Academy continuously aim to deliver training programs for both the professionals and undergraduates to further enhance their competency and knowledge in Software-based IT programs ultimately preparing them to be globally competitive.